Great River Rescue is a nonprofit no-kill animal shelter located in Bemidji, Minnesota.  They’ve helped over 10,000 animals since they first opened in 1977 and they currently help over 300 animals per year!

They’ve repeatedly shown incredible success with their fundraising campaigns, and we’re happy to call them our nonprofit champions.

To understand how Great River Rescue has been so successful with their campaigns, we asked their director, Brandon, some questions:

Q1:  You’ve had many successful campaigns, including Mugs for Mutts that was 146% funded and Walk for Animals/Bark for Life 2015 that was 106% funded.  Which of your campaigns were you the most impressed with and what, if anything, would you attribute to this campaign’s success?

A1:  I have been pleased and impressed with different fundraisers for different reasons.  I was very impressed with our Walk for Animals fundraiser because it was a larger, coordinated effort among volunteers in which we reached a significant goal.  On the other hand, I was impressed with a fundraiser I created for a specific need because a single donor saw our need, and made a big contribution to cover the whole amount requested.

I would credit our success to being open with the public, being persistent, and making our campaigns fun.  In the Walk for Animals fundraiser, a few of us really made it a competition to raise more money, and that drove a lot of donations. 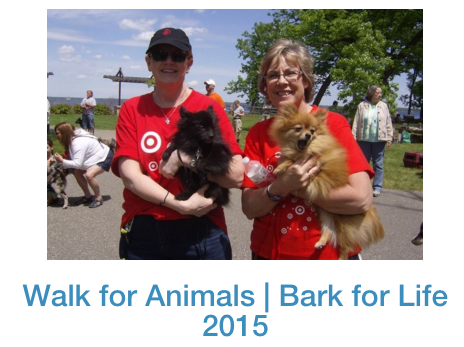 Q2:  Walk us through your plan of action for this particular campaign:  (Walk for Animals).  How far in advance was it planned?

A2:  It is an annual event, so some of the planning is easier since we are used to what needs to be done.  We really start meeting and planning about 5 months prior to the event.

Q2(a):  What outside resources or partners (if any) did you work with?

A2(a):  It involves a volunteer committee to help plan the event; volunteers to help administer the event, and community partners who sponsor and participate.

Q2(b):  What things needed to occur before it was initiated in order for it be the success that it was?  Did you follow a timeline (for instance)?

A2(b):  Mostly planning and coordinating among volunteers.  The event is scheduled well ahead of time and tasks are delved out several months ahead of time.

Q3:  Of the donors for this campaign, about what percentage would you say were repeat donors versus new?

Q3(a):  What efforts have you made to reach out to new donors and were any of them particularly successful?

A3(a):  We use several grassroots marketing efforts to spread the word about our event.  Some of those things include posting flyers, making social media posts, sending out a press release, promoting the event with our clientele, and using word of mouth.

Q4:  How did you recruit your fundraising champions?

A4:  Fundraising champions were recruited through direct requests of volunteers and emails to organization volunteers.

Q5:  How would you describe your relationship with your donors?  How frequently do you interact with them?

A5:  It really depends on the donor.  We do send out a quarterly newsletter that goes to most of our donors.  We also send out regular emails and have a good Facebook following.  Finally, Board Members make 5 donor thank you calls each month.

Q5(a):  What medium(s) do you utilize most for communication?  (social media channels, email, direct mail..?)

Q5(b):  How responsive and involved are your donors?

A5(b):  Some are very responsive, but most are not.  Most donors continue to donate, but don’t get involved in other activities.

Q5(c):  How important would you rate your relationships with your donors to the success of this fundraising event?

A5(c):  I would say it is extremely important.  It is much easier to find fundraising champions when you’ve developed a relationship with the donor.

Q6:  Was there anything you learned from this campaign that stood out as something you could implement again?

A6:  I loved turning it into a competition.  If only I could get more people involved in the competition, we could raise a lot more money.

Q7:  What is your single best piece of advice for other nonprofits when it comes to launching a successful fundraising campaign?

Congratulations to Great River Rescue on your campaign success!