Donor Fatigue and The Ask: How Much is Too Much?

There are different schools of thought on Donor Fatigue, and not all strategies will work for every nonprofit. But in reality, it’s not how often you ask, but how often you’re interacting with your donors and closing the loop on the last ask.

Many nonprofits we work with at GiveGab have shown concern about donor fatigue, especially when it comes to crowdfunding. A crowdfunding campaign is typically a small part of their overall fundraising budget, so they can be reluctant to ask their donors to keep giving.

It’s not the frequency of the ask that’s the issue; the problem is asking supporters to give again when you have not told them what you did with their last donation.  So there has to be some level of engagement between asks, specifically telling the donor what was done with their donation from the last request.

Some of our nonprofit friends think there are hard and fast rules to asking, such as “don’t ask again for two months” or “don’t ask more than five times in a year,” and so on.  As long as you close the loop on the last ask, the new one should not be negatively perceived.

Most donors would prefer to make small donations to very targeted campaigns rather than make a larger donation to something more general, as it gives them a sense of control over how their donation is spent.

Option A: One donation of $250 to a broad campaign (i.e., Playground Rebuild Project), as compared with Option B: Five donations of $50 to five very specific campaigns for the same nonprofit (i.e., Seesaw, Slide, Basketballs, Monkeybars, and Swings). 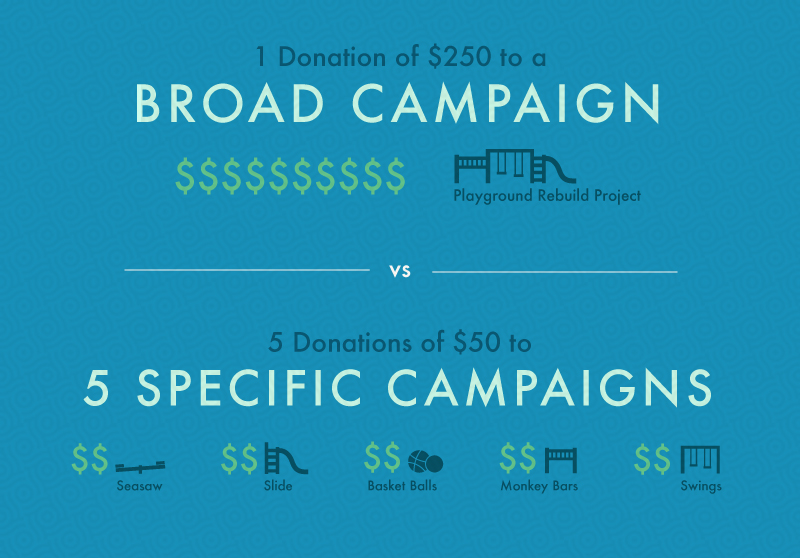 Donors generally would not get donor fatigue from Option 2 if after each campaign they were told what the money was used for and it coincided with what they thought it would be (i.e., what they signed up for).  That is probably contrary to conventional thinking!  But remember, crowdfunding is not “conventional,” so the rules for the major giving model do not necessarily apply to this new way of doing things.

But why does it matter how often they donate if it’s the same amount? As you likely realize already, donor retention is a critical part of your fundraising strategy. Keeping donors engaged and excited about how they specifically contributed to your organization can impact that retention rate and lead to more donations in the future.

This paradigm shift from “don’t ask too many times” to “ask often but show the impact of gift between asks” needs to be made by nonprofits, especially in light of crowdfunding.  This, in turn, will increase the number of successful campaigns and help smaller, targeted campaigns to be even more successful!