GiveGab, Inc. has all of its technology assets hosted in the Cloud backed by market leading cloud providers with highly available (H/A) and fault-tolerant infrastructure at the highest levels of security, availability, and compliance:

Stateful data and assets are stored in secure locations and backed-up automatically in fashions at various facilities not only in real-time to hot-failover replicants but in with snapshots hourly, daily, and weekly.  Cloud providers by nature must provide a superior level of commodity services to its customers and this in turn provides us the least risk and quickest recovery from a disaster. A significant portion of the Internet’s services run in these cloud providers’ infrastructure.

While there is always risk, at this point, GiveGab feels that we have over-protected against these risks with a Double Failover Strategy with the 2nd level failover being to a completely different cloud IaaS. We are dealing with risk tolerance in the 0.0001%. This involves distributing the hosting of our software to multiple independent cloud providers as well as DNS failover.  While some components of the overall technology architecture could fail at this level, our systems are built so that automated-detection would failover to healthy resources, such that systemic failure is extremely unlikely to occur. If systemic failure occurs, then we invoke our contingency plan to leverage our Double Failover Strategy noted below with an RTO of 120 minutes for cold DB failover from backup.

GiveGab consistently runs high-load events including days when we have 70+ giving day sites running live and processing over 125,000+ donation transactions for more than $15M+. Our platform is continuously and automatically load-testing every other week to ensure peak performance without regression. 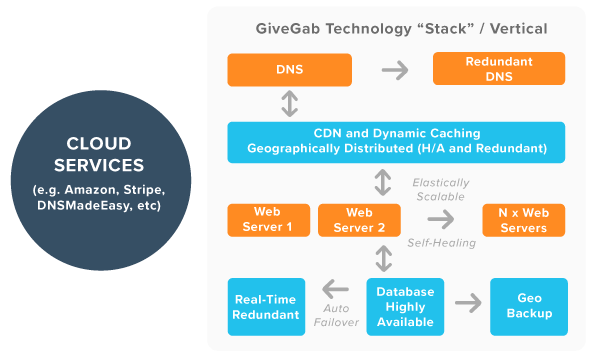 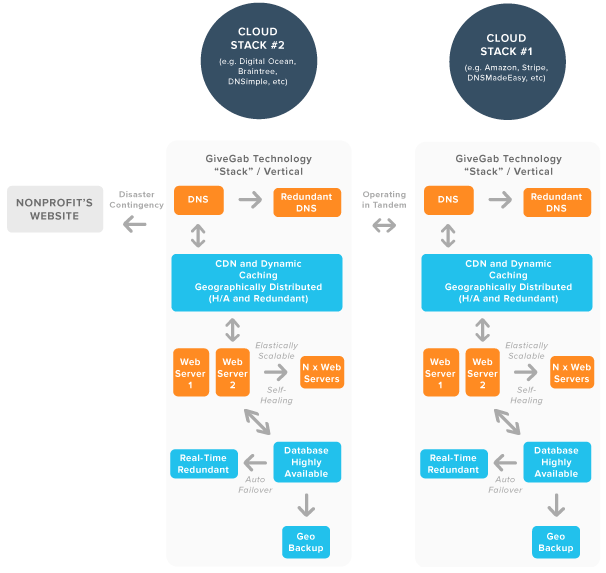 In general, our giving day architecture is designed to withstand many issues: 99.999% of issues are seamlessly handled without disruption by our Level 1 H/A cloud services.

In the extremely unlikely situation that we need to failover to Level 2 for our application services, users could expect to see a brief and at most 60 minute delay, and many users and groups would see no downtime at all. For practical purposes, there would likely be no noticeable downtime for the majority of users.  If total catastrophic Level 1 infrastructure failover happened to our DB, we would need to provision and load a new database from one of our real-time backups and RTO would be 120 minutes.

Finally, in the most catastrophic situation, we could work to failover to a nonprofit’s website; and leverage our embeddable for solutions to host forms right on their website; however, some major issues impacting most of the internet would likely be occurring and the giving day site may be overshadowed by much more serious things.

Since our primary technology stack is built on top of the #1 Cloud provider, Amazon WS (https://aws.amazon.com/resources/gartner-2016-mq-learn-more/), we are able to build contingency planning into every component of this architecture even on top of the fault-tolerancy and redundancy that you get by default from Amazon WS.

The impact on users is dependent on the particular component that is failing over or experiencing an issue.

In most cases, where the built-in H/A and fault-tolerant capabilities are invoked, users should not experience issues other than the couple of users that made a request which invoked the error alerting and automatic failover.

In the case of catastrophic Level 1 issues, we would expect at most 15 mins of degraded performance.  This again is in the 0.001% risk factor percentile.

Our Fastly load balancer would be quickly re-configured to remove any endpoints from the failing technology stack and to only point at the secondary Level 2 providers.  We would also provision out more resources to handle the influx in volume usage.

If our Fastly service fails, we can quickly reconfigure our DNS to point directly at our web servers on Heroku.

If Level 1 fails, this means that there is likely a catastrophic failure with Amazon WS which would effectively impact at least 20% of the websites on the internet.  At this point, more than the giving day itself would be highlighted by users on the internet.

Similar to Level 1, our Level 2 Secondary architecture is built on top of highly-available Cloud providers; therefore, would have similarly built in failover components.

Similar to above, the impact on users is dependent on the particular component that is experiencing an issue.

In the case of catastrophic Level 2 issues where we’d need to failover to DNS re-direction, we would expect up to 1 hour of degraded performance.  This is in the 0.0001% risk factor percentile.

We would point our DNS records to resolve specifically at each participant’s self-identified web site.

If Level 2 fails, this means that there is likely a catastrophic failure on the United States Internet and that there was a serious national or global disruption occurring.  Likely at least 75% of websites on the internet would be down and even though we will fail-over to nonprofits’ websites for people to look at and give to directly, it could be very likely that their own websites were also disrupted at this point.

Something catastrophic and bad would likely be happening and the giving day would not necessarily be the most pressing issue to deal with.

The giving day URL would no longer resolve to the GiveGab giving day platform, but instead to the nonprofit’s website.

Users would start to see URLs resolve to the nonprofit’s web site and people would still be able to give with little downtime during the switchover.  Unfortunately, we would lose the ability to keep track of, aggregate and total up stats around gifts.

This is serious disaster recovery mode, but again, users are not impacted as they are directed simply to the nonprofit’s website, assuming that is still available itself.

It would be likely that there are some serious issues going on with many of the major Cloud providers and likely internet connectivity and service issues across the World Wide Web would be severe and not isolated to the giving day site.  Again, it’s likely that each nonprofit’s site could also be experiencing issues.

We use cookies on our website to give you the most relevant experience by remembering your preferences and repeat visits. By clicking “Accept”, you consent to the use of ALL the cookies. However you may visit Cookie Settings to provide a controlled consent.
Cookie settingsAccept
Manage consent