On March 14 and 15, Western New York celebrated its fifth annual Giving Day, Spring it On 2017.

Spring it On is an online fundraising event aimed at raising awareness and resources for nonprofits throughout Erie and Niagra County.  This day was established by The United Way of Erie and Buffalo County in order to provide positive focus to participating organizations. 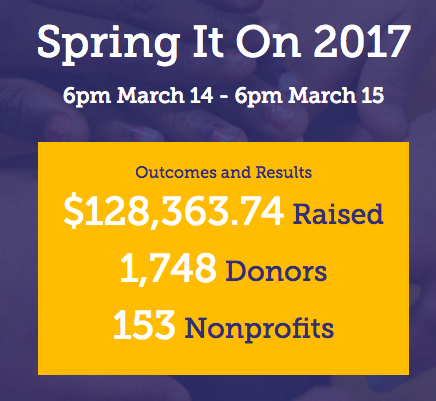 Supporters can still give through SpringitOn.org until the end of March 2017, which will effect the above totals.

Throughout the Giving Day, nonprofits with the Most Raised and Most Donors were updated in real-time and showcased on the Spring it On Leaderboards:

The International Institute of Buffalo topped the leaderboards for Most Raised and Most Donors in 24 Hours with over $15K raised from 68 donors!

This nonprofit included a compelling video along with a summary of their vision within their giving profile.  They also had a fundraising champion that contributed over $300 to their campaign.

Community outreach through social media and email engagement from each participating nonprofit, their supporters, the United Way, and local media sponsors, played a critical role in the success of this Giving Day.  Social share images, email templates, and other resources were made readily available within the website’s Nonprofit Toolkit for anyone who wanted to help promote the day.

Spring it On has partnered with Next Generation United to throw a five-year celebration party on March 21st at 5:30 PM, located at Big Ditch Brewing Company. It’s free to attend, so check it out:  Millenial Mixer & Spring it On Celebration.

From all of us at GiveGab, congratulations to Western NY on your fifth successful Giving Day!  We’re looking forward to celebrating with you in 2018!