Our top grossing campaign, raised $101K online and had help from 835 fundraising champions. That’s super impressive! This particular campaign is a huge yearly event that encourages registrants to fundraise in addition to participating. In this particular case, having more champions makes a lot of sense.  Though it’s important to remember that all campaigns are different.

Let’s take a look at two recent campaigns on GiveGab: 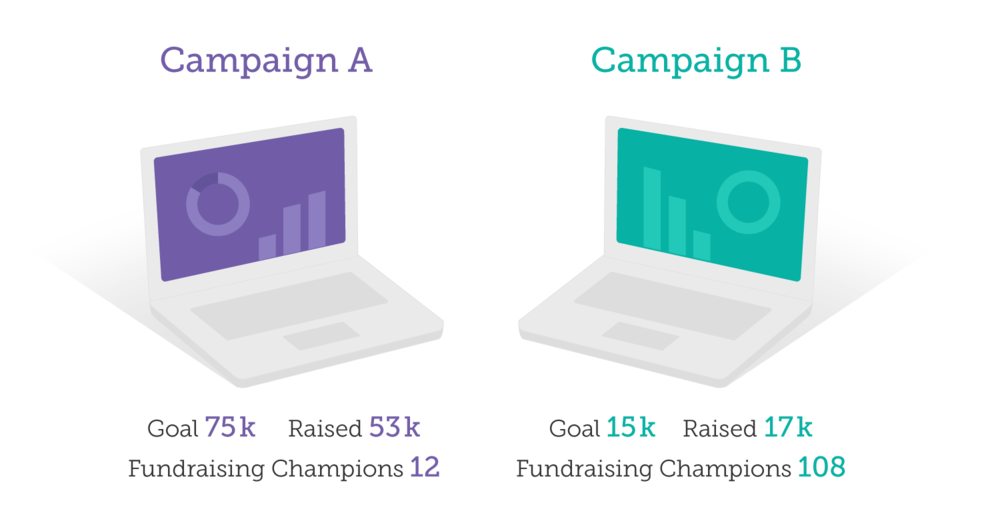 Though Campaign A raised more money with only 12 champions they didn’t meet their goal.

Campaign B had 108 champions and happened to raise more than their goal.

I consider both of these campaigns successful and quite impressive. Though, I think there’s a valuable lesson to be learned here. If we can better identify our fundraising champions, we can set realistic goals based on the actual number of supporters we have available to us.

We know finding a bunch of fundraising champions to help you achieve your goal is much easier said than done.

To help you identify who, I’ve broken down fundraising champions into two types:

Just like magical unicorns, they might be hard to come by, but all-star fundraisers are naturals when it comes to fundraising and have a great network of people they can tap into.

Who Are They: They may be supporters who have fundraised for you in the past, dedicated board members or frequent volunteers for your organization. Oh, and YOU. As the nonprofit administrator, you should consider yourself an all-star!

What to Ask of Them: You may want to give these fundraisers more challenging goals, especially if they’ve raised money for your organization in the past (In the range of $500-$2500). These all-stars may also may be great leaders. If so, they would be great team captains if you enable team fundraising for your peer-to-peer campaign.

Strength in numbers. Critical Mass fundraisers could be highly effective in large numbers.

Who Are They: They could be a long-time volunteers or donors. They could be a group like a local business or school group you’ve collaborated with in the past. It’s likely that this group has never fundraised before and may need more guidance than the all-stars. Their networks are also very important and valuable to your organization.

What to Ask of Them: You may want to give these fundraisers easily achievable goals (In the range of $100-$500).  Critical mass fundraisers could also benefit from being on a team so they may receive encouragement from fellow teammates and also have a level of accountability. If we set them up for success, they’ll be more likely to fundraise for you again and set higher goals the next time around. Who knows? They could even become ALL STARS!

After you’ve identified who these supporters are, it’s time to ask them to become fundraising champions. Remember to be direct but also encouraging with your ask. Don’t be afraid to include expectations like, “We are encouraging each of you to raise X amount”

Once you know the number of all-stars and critical mass fundraisers you have it’s time to set realistic goals for your campaign.

Think of a ballpark number you would like to raise based on past benchmarks from previous campaigns.  If you haven’t done this before, start with a reasonable goal that will challenge you, but is realistic. This number can help you determine how many fundraising champions you’ll hypothetically need.

Let’s look at a few scenarios.

Say you wanted to raise 10k for your #GivingTuesday campaign. You could get there by recruiting:

OR Mix it up depending on how many willing supporters you have:

Depending on the how many fundraising champions you have, 10k may be too low or too high and you might need to adjust your campaign goal accordingly.

Regardless of how many champions you have, it’s easy to see that peer-to-peer fundraisers can have a huge impact on your campaign.

It’s important to identify your fundraising champions and set realistic goals, because your supporters want to feel like they are a part of a winning team!

Create a #GivingTuesday campaign on GiveGab by November 15 and we’ll send you a free t-shirt! Get Started Now!