As a nonprofit, seeing the words “zero fees” or “free” for online fundraising likely brings about a sigh of relief.  After all, the less you have to spend to raise important funds, the better, right?

In the end, it really depends on what you get out of your online fundraising efforts.  If you end up with more donations and better donor engagement after paying to use a platform than you would have using a “free” service, then obviously the investment was well worth it.

It was recently announced that Facebook has dropped their fees for nonprofits fundraising through their social platform, but are there any downsides to Facebook Fundraising?

Here we’ll investigate how you can utilize Facebook for fundraising in a way that’s most beneficial to your nonprofit.

Facebook is the most widely used social media channel for nonprofits across the globe, so it only makes sense that you’d want to do some of your fundraising there.  However, should you rely on Facebook’s fundraising functionality for all of your online fundraising efforts?

Probably not, and here’s why:

Until you reach a minimum of $100 in donations, Facebook won’t transfer any funds to your bank account.  In contrast, GiveGab deposits your funds directly within 24 hours without a minimum.

For instance, offering giving levels or donation tiers that can be customized with photos and a description of what that monetary amount will help pay for, has been shown to positively impact a donor’s willingness to give because they feel they’re being given a choice as to where the money is going, making the process more transparent.  You can add giving levels on Facebook, but the only thing you can customize is the monetary amount.

See this side-by-side example of a Facebook campaign vs. a GiveGab campaign: 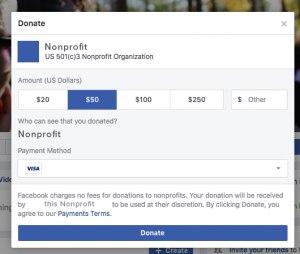 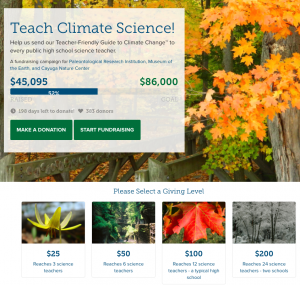 3. You will miss out on anyone who isn’t on Facebook or doesn’t want to donate there

It’s important to know who donated to your campaign and to have a way to reach out to that person following their gift.  Facebook doesn’t have this functionality built in at the moment, causing a lot of frustration for those who have received donations and have to conduct some time-consuming investigation to figure it out.

5. You can now link to the website of your choice through Facebook’s Donate button

A positive and recent development from Facebook is the ability to link out to any URL of your choosing through their Donate button.  If you add a link to your GiveGab campaign or to a donate page on your website, your supporters will be prompted with the message, “Donate Through Another Website”, alerting them to the fact that you’re choosing to collect online gifts elsewhere. 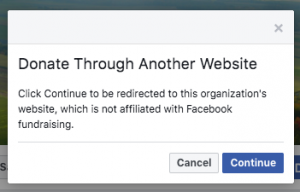 One of our nonprofit users on GiveGab shared her experience using Facebook Fundraisers:

“We had no idea people were [fundraising on our behalf] on Facebook (FB) and those users had no idea that FB was not letting us know in some fashion.  They had no idea who gave to their cause using the FB button. We had to go through donations that came through FB into our account and try to match them to people who we knew (through them telling us) had used the FB button.  We then had to write to them saying are these your friends?  We did this to apply them as offline donations to their page on our event page.  We were so thankful (if that can ever be understood from a development standpoint) that few people used this FB button because the work in figuring out what individual fundraiser to give credit to for the gifts was not easy.  There also seemed to be a minimum of sorts, maybe $100 total gifts, before we could even get our money transferred out of FB into our checking account. Whatever it was, it meant us logging in to our FB account (not our FB page) and checking our account because we were not notified that money was sitting there.  Overall, it felt more like a bane rather than a blessing.” – Anonymous Nonprofit

Facebook is a great promotional tool, and if used strategically, can also be great for online fundraising.  Just make sure you’re the one that’s choosing where your supporters go to make their donations to your organization, so you’re aware of any constraints ahead of time.