When it comes to paid advertising on social media, Facebook is the go-to place for most nonprofits, as it continues to be their most used social media outlet.

Much like everything else on their social platform, algorithms and other details around Facebook posts and ads tend to change regularly.  These days, for instance, you can’t just post something on your newsfeed and expect your followers to see it.  Where and when your post appears on a fan’s newsfeed depends on a variety of factors.  One of which is cost.

Deciding where to invest money on Facebook can be based on any of the following goals:

If you want to raise awareness around your nonprofit’s brand and gain more followers on Facebook, the recommended course of action is to utilize ads that charge you based on the number of impressions made, also known as CPM (cost per 1,000 impressions).

An impression is considered any time your ad appears in someone’s newsfeed or amongst the other ads that show up in the “sponsored” section of their home dashboard.

2. Promote a Specific Campaign or Link

If you want a specific campaign or link to be clicked on with the intent to gain increased traffic and incoming support, you’ll want to pay for an ad that charges per click, also known as CPC (cost per click).

If you want to amplify not only the link clicks to a particular campaign or to your website, but also other actions such as “likes” and “shares” you can opt to pay for any such actions that result from people viewing your ad, also known as CPA (Cost Per Action). With this option, you’re paying for any actions taken and not for impressions.

If you’re not paying for a particular post to be seen, it may be missed by much of your intended audience.  The simplest way to approach this issue is to Boost a Facebook post by paying a set dollar amount per day to increase its exposure and influence while also targeting a particular audience of people.

Below is an example of a GiveGab Facebook post that wasn’t “Boosted” and therefore only reached 51 people.  When you click the Boost Post button, you’re given options for how much you want to pay, who to target based on certain demographics, and then provided with an expected audience size (e.g., 200-300 people). 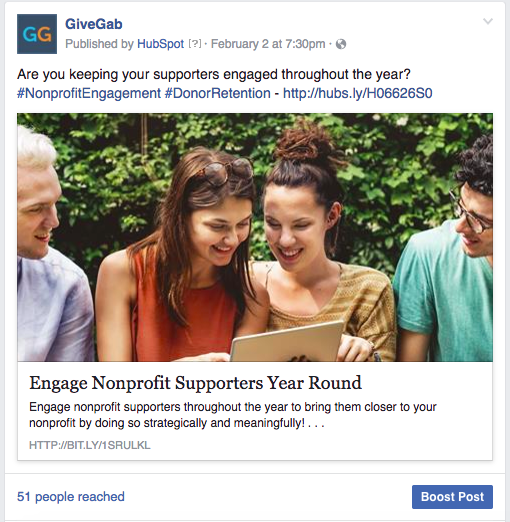 Once you’ve matched your goals with the form of advertising you want to use on Facebook, make sure to follow their Business News archive to stay updated on any changes.

For more advice on how to move forward with social media for your nonprofit, read A Strategic Guide to Social Media for Nonprofits.