Wait!  Don’t leave!!  This is totally relevant to our nonprofit administrators and helps explain why you should be asking for more money from your donors.  Let me explain…

One of the first things I often hear from nonprofit fundraisers is that they want to make sure they don’t send out too many emails.  That begs the question, “how much is too much?”, to which the answer is almost always, “we don’t want to annoy anyone”.  This logic seems to make sense and is of course very admirable.  It’s also very wrong.  Wrong, that is, if you want to reach the majority of your potential donors.

I’d like to quickly walk you through my logic on this issue.  Basically, the general population’s sensitivity to fundraising is very similar to almost every other human characteristic.  It falls within a standard bell curve.  People on the nearest end of the bell curve are sensitive to even the slightest outreach or request, while those on the far end of the bell curve either won’t notice or won’t care no matter how much you send them.  Everyone else falls somewhere in the middle. 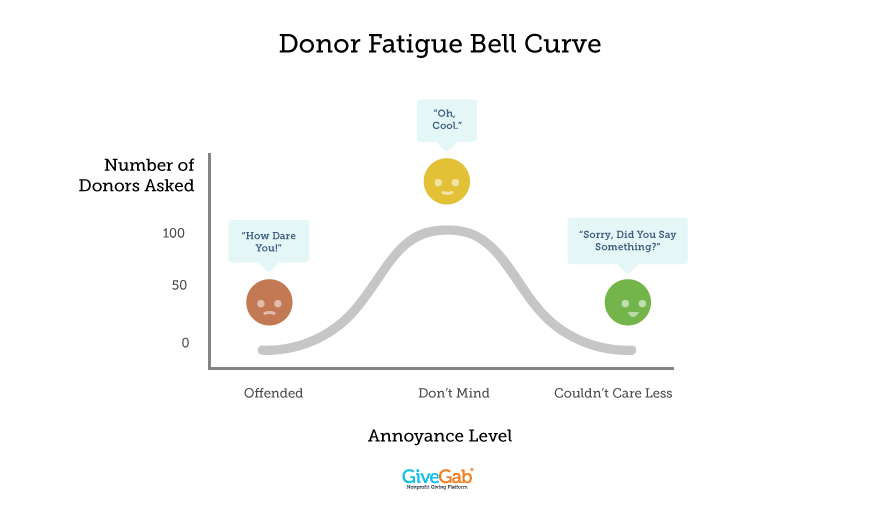 So if you choose to bother no one, you’re literally choosing based only on the few people who fall near the end of the bell curve.  The most sensitive will respond negatively almost immediately before most people will even notice your initial requests – let alone have enough time to consider responding and becoming a donor.

To reference our article on how to prevent donor fatigue, the friends we interviewed from Forefront provided the following advice regarding donation ask frequency:

“Don’t be afraid to ask multiple times, until you’re able to get what you need…We’re friends with some of the people who started Obama’s campaign and they were successful because they just kept asking until they got what they needed.  I think a lot of times nonprofits don’t, even though they say they’re doing the most important work, I think sometimes they don’t believe it…Make it very clear in the ask that this is the most important thing.”

Remember, your cause matters.  It makes a difference to the world.  You have to be a great fundraiser!

As a friend of mine once said in a quote that eloquently highlights this sentiment, “If you ain’t rubbin’, you ain’t racing” – And you ain’t fundraising either!