GiveGab Gives: A Laughing Contest for the Animals

GiveGab Gives held another giving contest in conjunction with Valentine’s Day as a way of celebrating our love for nonprofit causes.

Now that we have a bigger team, playing multiple games of foosball to determine a giving winner just doesn’t cut it anymore!  So, instead, we got creative and put together a laughing game.

For this game, a couple of us came together and brainstormed a list of random, funny/nonsensical sentences that we then wrote onto packets of heart-shaped gummy snacks to be handed out to everyone participating.

With the majority of our team gathered around a large table, one person at a time was instructed to read their sentence out loud without laughing – Anyone who laughed during this game would be disqualified!

An example of a sentence would be, “My nickname in high school was little bunny foo-foo.” 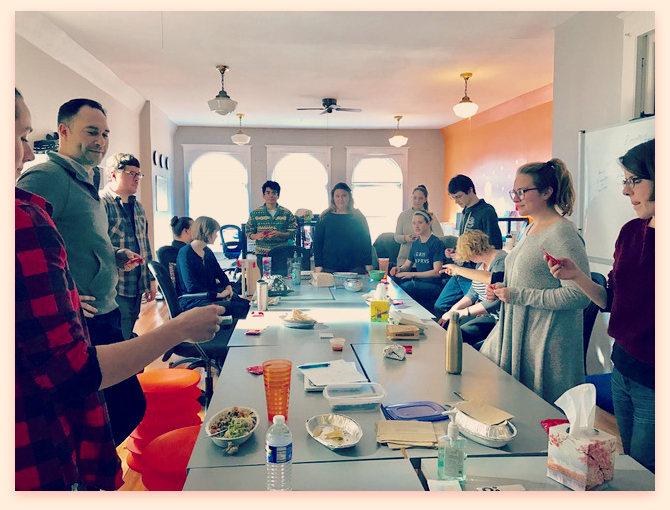 Out of fifteen (or so) participants, the winner came down to four sticklers who wouldn’t even chuckle, so we had to change up the rules a bit by incorporating some Simon Says!  After being told to do things like stand on one foot, rub their belly clockwise, and so on, eventually there was only one person left standing…

For the win, Christel received a Lover’s Loot mug from the SPCA of Tompkins County that contained chocolates and a prize ticket to be redeemed from their shelter.

In addition to winning this prize, Christel was also allotted $50 to donate to the nonprofit of her choice.  Like many of us here at GiveGab, Christel LOVES animals, so she chose to give this money right back to the same SPCA!