Canisius College has always had a strong base of support, but over the last decade, the college was experiencing an overall decline in participation following a trend seen across the higher ed landscape.

Furthermore, opportunities to engage faculty in the fundraising process and to raise funds for specific programs were limited. This resulted in a sense of skepticism amongst faculty about the role of philanthropy at the college.

Canisius’ first Giving Day on April 27, 2016, however, served as the tipping point for the college to begin turning these trends around. A significant number of faculty participated in the day – not only by making gifts themselves but by encouraging graduates of their programs to participate as well.

In addition, the college brought in 692 new and previously lapsed donors, which helped the Canisius Fund conclude their 2015-16 campaign with 700 donors ahead of the previous year. Erin Hartnett, the director of the Canisius Fund, referred to Canisius College Giving Day as “a game changer in the history of the college.”

“[The Giving Day was] a game changer in the history of the college.”

There were a multitude of reasons why Canisius’ first Giving Day was so successful, but ultimately it allowed the college to meet people where they are today – on social media and online. It also allowed the college to tap into its own broad network of ambassadors as well as the networks of those who are passionate about Canisius.

How They Did It

During the months leading up to Giving Day, Canisius Fund staff actively promoted the initiative to key volunteer groups and faculty and staff, securing a base of volunteers, referred to as Giving Day Ambassadors.

Giving Day Ambassadors were instrumental in getting the #CanisiusGivingDay conversation started by being amongst the first to make “noise” on social media. The conversation was continuous and contagious on 4.27.16 with alumni, friends, and family posting about why they donated, using the social share functions at canisiusgivingday.com, and sharing and liking the college’s posts. 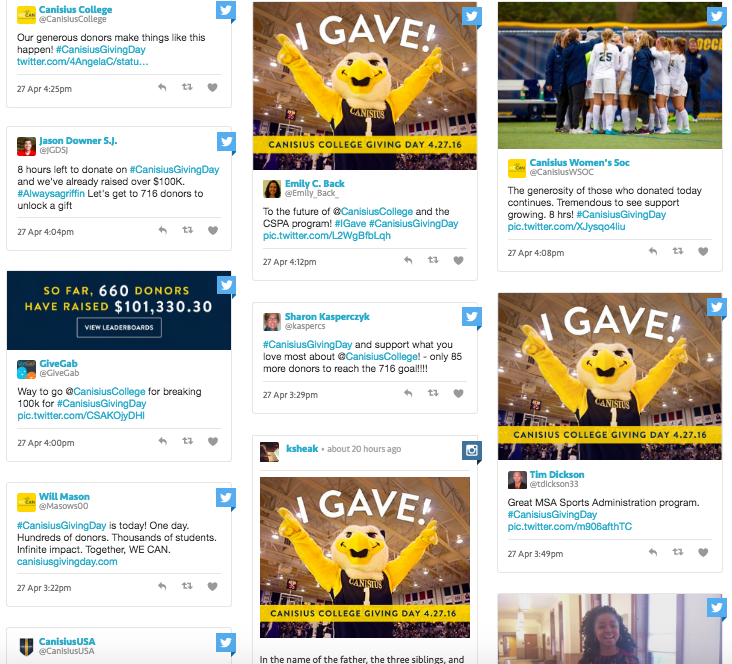 A series of challenge grants were promoted, encouraging participation in the campaign. Leaderboards were monitored throughout the day and friendly competition ensued. In addition, students took social media by storm expressing their gratitude  for Giving Day donors and what they love most about their Canisius experience, making the #CanisiusGivingDay conversation that much richer.

The goal was 427 donors in 24-hours, but Griffins far-and-wide rallied together and knocked that goal out of the park. A total of 1,093 donors – students, alumni and faculty and staff, and friends – contributed more than $223,000 between 12:00 a.m. and 11:59 p.m. on April 27. It was a 24-hour campaign that was fueled by the passion, commitment, and magnanimity of the Canisius community.

Canisius said that they could, and together they did!

From all of us on the GiveGab team, we want to congratulate Canisius on your Giving Day success!